A day after Kavin’s 3rd birthday, we went to port Benoa. A greenpeace famous ship has been landed on Bali, at the port Benoa. I didn’t want to miss this chance so I asked my husband to go there with the kids. It is a rare opportunity to see the Rainbow Warrior and even go inside the ship. Greenpeace journey has been started in Papua, the second place to land was Bali, Next is going to be Jakarta for a week on April 23-29 2018. The journey is called “Jelajah Harmoni Nusantara” Rainbow Warrior Southeast Asia Ship Tour 2018.

From Angkah village in Selemadeg Barat, Tabanan to port Benoa it takes about 2.30 hours by motorbike. Our destination is approximately 50 km away. When we arrived on the Benoa highway, we had to pay the entrance highway fee for motorbike Rp 2,000. At the port, we didn’t need to pay any entrance fee or parking fee. It was all free. The Rainbow Warrior open boat event held by Greenpeace was also totally free. This event is held on April 14-15 2018 from 9:00-12:00 and 13:00-16:00. We came on Saturday, April 14 at 13:00.

When we arrived at the port Benoa, we had lunch first by the dock. We brought our lunch box and we shared meal with 4 persons: my husband, Kalki, Kavin and me. It was very hot at the port, by the way. We already prepared bringing 4 drinking bottle containing 3,1 L of water. And it was insufficient for the four of us. Because we were sweating a lot and we need drinking much water to rehydrate our body. We felt so thirsty almost all the time.

After having lunch, we could visit the handycraft stands by local communities who care to the environment and their products are mostly eco-friendly or by recycled materials. Kalki and Kavin tried to chill out at the painting tent, there were some cozy beanbags for lying down or sitting down. We could enjoy the ocean breeze here, and let the kids paint on a cut unused posters’ backside.

At 1 pm we made a line to enter the Rainbow Warrior. A group of visitors that allowed to enter in every session was 25 persons excluded children.  We went inside the ship in the first session.  There was an Indonesian tour guide who explained about the Rainbow Warrior. This Rainbow Warrior Ship was the third ship of Greenpeace. The first had been bombed by the French intelligent agent and the second one was too old to be operated. Next, Greenpeace made its own ship unlike its two ships before that those are modified ships.

Something unique about the ship that it has a dolphin wooden statue, its name is Dave the Dolphin. And it was brought from the first ship. There was also a classic hand bell in front of the steering room. Ships used to use hand bell in old times to acknowledge its coming but nowadays because of radio, GPS and etc, we don’t need hand bell anymore. In Rainbow Warrior there is a tradition to ring the hand bell on a new year’s eve by the youngest ship’s crew.

This third Rainbow Warrior is a sailboat with modern technology. It uses wind energy to sail, but it can use diesel too when there is no wind.This ship has big strong sail poles which form like the  alphabet “A” structures. Because of its huge sails, it uses machine to expand them and also with the help of the crews. There are some monitors in the steering room and as a controlling room also. Luckily, Kalki had the opportunity to sit on the captain’s seat! There were so many buttons and panels. Visitors and especially children were not allowed to touch anything there.

The next Rainbow Warrior captain!

The Rainbow Warrior’s crew who explained about the ship was Reinoud, his position is 2nd mate – I don’t know what it means. Unfortunately I didn’t ask him what exactly his posisition was about. I just asked about where the captain was. And the captain was discussing something with the crews in the other room behind the steering room.

Reinoud the 2nd Mate in the steering room and a translator

Reinoud explained that this ship has ever been followed by government war ships so close behind. He said that some government or companies felt afraid of the Rainbow Warrior. So, it’s good that they felt afraid because it meant that they did something wrong. Even their captain had also been terrorized too. The captain of Rainbow Warrior is a dutch woman named Hettie Geenen.

small door to the converence room

inside the narrow corridor

After going inside the steering room we went to the conference room. It was such a multifunctional room with a projector hanging on the ceiling. The crew could also set up some gym equipments there so they could do exercise. At that room, we watch a short video presenting about what Greenpeace had done especially in Indonesia.

Walking to the helideck

Thanks Kalki for Taking picture

We’re the next sailors!

Hanging on the rope

Kalki on the wall

“Where are all the crews?”

We are all Rainbow Warriors

Next tour was to the Helipad. Yes Rainbow Warrior has a landing deck for a helicopter. On the helideck there were some knockdown wooden wall for sticking posters about Greenpeace international. So we could read what kind of environmental issues that Greenpeace had been fighting for. From plastic waste to electronic waste, farming land that would be used as a mega electricity plan with coal, massive deforestation to start palm farming, air pollution, even about the bombing of the first Rainbow Warrior Ship.

The tour inside Rainbow Warrior maybe only took 15-20 minutes only. The next groups kept going on and on as the first group ended the tour. After I finished my tour, I took a rest by sitting down under the trees’ shadows. Because I had something to ask to the ship crew, I joined the next session for the second time. This time I went only with kalki. The tour was the same as the first. At the first session Kalki hadn’t got the chance for sitting on the captain’s seat, but at the second time, he got it.

I met with Sabine Skiner from Germany this time. She is the mechanic of Rainbow Warrior. I asked her whether there were any Indonesian crew in Rainbow Warrior. She said there were 16 crews from 14 different countries. 2 crews are from Indonesia: 1 deck-hand crew and 1 as a volunteer. At last, I asked Sabine to sign on my notebook.

Next, I skipped watching video in the conference room, I directly went straight to the helideck and read few articles there and then Kalki and I went to the land to meet Kavin and my husband. It was very nice to be inside of Rainbow Warrior and to meet the ship’s crews. Unfortunately I didn’t meet every crew of Rainbow Warrior and what I waited the most was to meet the ship’s chef, Daniel Bravo.

It was said by the Indonesian tour guide that all crew in this ship weren’t not only activists but they were also scientist and researchers. Meeting the only chef of the ship is very interesting to me, to know about what kind of menu did he always cook for all the crew and… besides that, he also looked like Orlando Bloom to me, haha. Reminding me to Pirates of the Caribbean so much!

It was a little bit disappointing that the visitors were not given a tour to every cabin and to the kitchen. We also couldn’t meet to every ship’s crew because only one crew that was in charge in the steering room to welcome the visitors. By chance, I noticed the other ship’s crew like Shuk Ning Cheung as a volunteer deck hand, Daniel Szony as 3rd mate and another crew inside the tools and equipments room, but I didn’t know who he was. Sabine said that Daniel was from Hungary. He appeared in the steering room at that time.

playing hot wheels on the dock

On the dock near by the ship was moored, we could enjoy dragon fruit juice and another fruit juice, but we needed to bring our own tumblr to get that juice. I didn’t know whether it was free or not so I didn’t  go to get that juice. There was also loud music by two DJs but they were gone at about 1.30 pm. There were a community which cared to the plastic waste named Bye Bye Plastic Bags, two persons came to me and asked a permission to interview about my concern to plastic waste.

There was also another community like Trash Hero, and the others that I din’t pay attention that much. However mostly there were communities that care to the environment and want a better change for Planet Earth. This time Greenpeace came bringing a campaign to use renewable energy, there was a giant phrase showed on the ship’s net: BALI GO RENEWABLE. And also on a long banner attached on the ship’s fence: “BALI SAATNYA BERALIH KE ENERGI TERBARUKAN”. Are you ready to use renewable and stop using plastic bags?

Our Indonesia’s minister of Maritime Affairs and Fisheries, Susi Pudjiastuti had visited Rainbow Warrior when it was landed in Papua, how about you? To me it is a cool opportunity that I won’t miss! Let’s join to be an ocean defender!

It was so hot! But a cool experience though

6 thoughts on “A Tour to Rainbow Warrior: a Greenpeace Ship Landed in Bali” 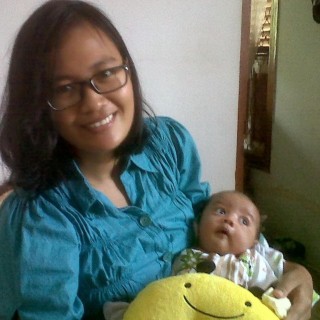 A journal of an Indonesian in The Netherlands

The girl with the blue suitcase

I was a parisian